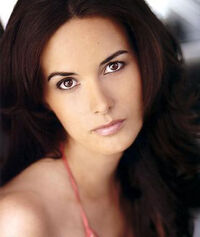 Christine Chatelain was born and raised in Vancouver, British Columbia. While studying art history, Christine tried her hand at acting. Her hobby quickly turned into a full time job, as she landed roles in the movies 40 Days and 40 Nights, Intern Academy and Destination, among many others. She has also appeared in numerous television shows, including The Collector, Supernatural, Smallville, Psych and a multi-episode arc as the Invisible Woman in Syfy's Sanctuary. Additionally, Christine received a Leo award nomination for her work in The Collector.[1]